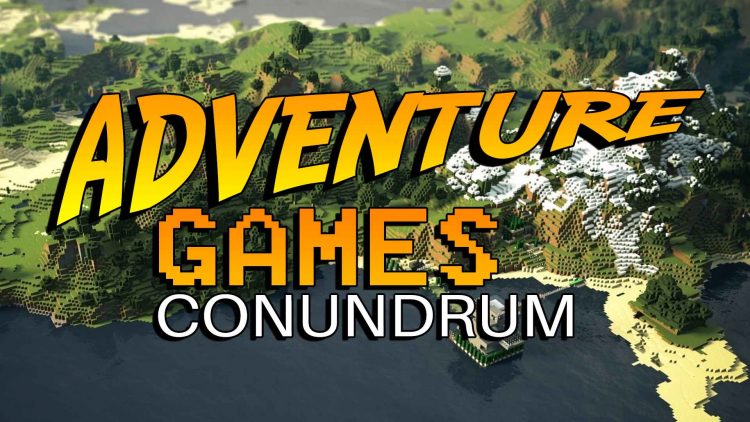 Can you tell me what Day of the Tentacle, Heavy Rain, Minecraft,  and The Cave  all have in common? Neither can I, but they apparently all share a genre. Join me as I speculate on what, exactly, an adventure game entails.

Where am I Going, and How Do I Get There?

The dictionary definition of adventure is “an unusual and exciting, typically hazardous, experience or activity.” Unfortunately, this definition includes every video game that has ever been made. So, when a game labels itself as an adventure, what is it actually saying? Or, is it really saying nothing at all?

If every game can be called an adventure, then what business does any game have in acting like it’s a separate type of game?

When a person thinks of adventures, they think of strange, foreign locales, backpacking through unknown wilds, and experiencing different cultures. An adventure is the act of experiencing what life is like outside your comfort zone. If you live in North America and you go visit Africa, you’re on an adventure. If you live in Africa and you take a trip around Africa, you probably aren’t on as much of an adventure as you could be if visiting North America.

When every game already involves going to new places and seeing new things, then what does a game have to do to be considered an adventure above and beyond the norm? Is it simply a matter of scope, or are there specific things a game needs to qualify as part of the genre?

Granted, any game can have an adventure in it, or even several adventures if they’re feeling… adventurous. The beauty of games, and indeed all art, is that they don’t have to be any one thing. A puzzle/platformer can also be an adventure game. But, since all games could be called an adventure by definition, wouldn’t they have to actually focus on the adventure part before they could say they’re in that genre?

If you’re in a strange world, and going through that world involves platforming and puzzle-solving, but no goal is given beyond experiencing the world itself, then perhaps that could be called a puzzle/platform/adventure game. But if you’re there to find, to use a random example, the Orb of Omnipotence, and once you find it the story’s over and you’re going back home, I don’t think the game could say you’re actually there for the adventure. You’re there for the Orb, and if it wasn’t in another world you wouldn’t be having an adventure at all.

It’s all about goals, really, and what the game is trying to convey. Is the game trying to tell a story? What is the story about? If we’re talking about kings, queens, and political subterfuge here, then it doesn’t really matter where the story is happening. If the story is about a long forgotten kingdom that we experience by digging through what few ruins it left behind, then by golly we’re on an adventure. The purpose of an adventure game ought, of course, to be the adventure itself.

It’s a Long Way Down

Let’s take a look at the quintessential adventure story, Alice’s Adventures in Wonderland.  A young girl, enjoying a perfectly normal day, makes an impulsive decision to follow an impossible rabbit and finds herself lost in a nonsensical world. There’s no real plot to the story beyond Alice being in a weird place where weird things happen, and it ends when she wakes up from what turns out to have all been a dream. At its core, the story is only about the adventure itself; she isn’t saving the world, she isn’t solving any puzzles or unearthing ancient riddles, and there’s no tangible goal beyond Alice being in Wonderland.

If a game’s only listed genre is adventure, then by all rights it should only be about the adventure, shouldn’t it? An adventure story is about where you are, not what you’re doing. Defeating the evil tyrant, saving the princess, all that might happen during an adventure, but those themselves are called quests. A knight goes on an adventure to undertake a quest: he visits a distant land (adventure) to accomplish a task (quest).

If the adventure ends after finishing the quest, then the goal of the game was only ever about the quest, now wasn’t it? That knight sure as heck wasn’t there to document new species in the nearby forest. We’re Not in Kansas Anymore

It seems to me that a lot of games calling themselves adventures these days are, in actual fact, suffering more from a lack of focus that keeps them from fitting under any one genre. And, since all games can technically be called adventures by the dictionary definition, they label themselves as such because they themselves lack any real identity. Just as a game with stealth in it isn’t necessarily a stealth game, or how a game with RPG elements won’t always be a role-playing game, and a game that may be scary can’t always call itself horror, so too does a game that have adventure not always qualify as an adventure game.

If all games are calling themselves adventures, then what does the genre really mean? What kind of gameplay can I expect when I buy an adventure game? What separates Heavy Rain from Minecraft?

9 comments on “Adventure Games: Are They Really Adventures?”