The martial arts based Action RPG Absolver, by Sloclap and Devolver Digital released this past week to much excitement and anticipation! Souls fans, PvP enthusiasts and players just wanting something new all seemed to be holding their breath until August 29th. Well the date has come and gone and the game has had mostly positive reviews, so let’s weigh in on this Indie title that seems to have captivated the hearts of the Souls community. 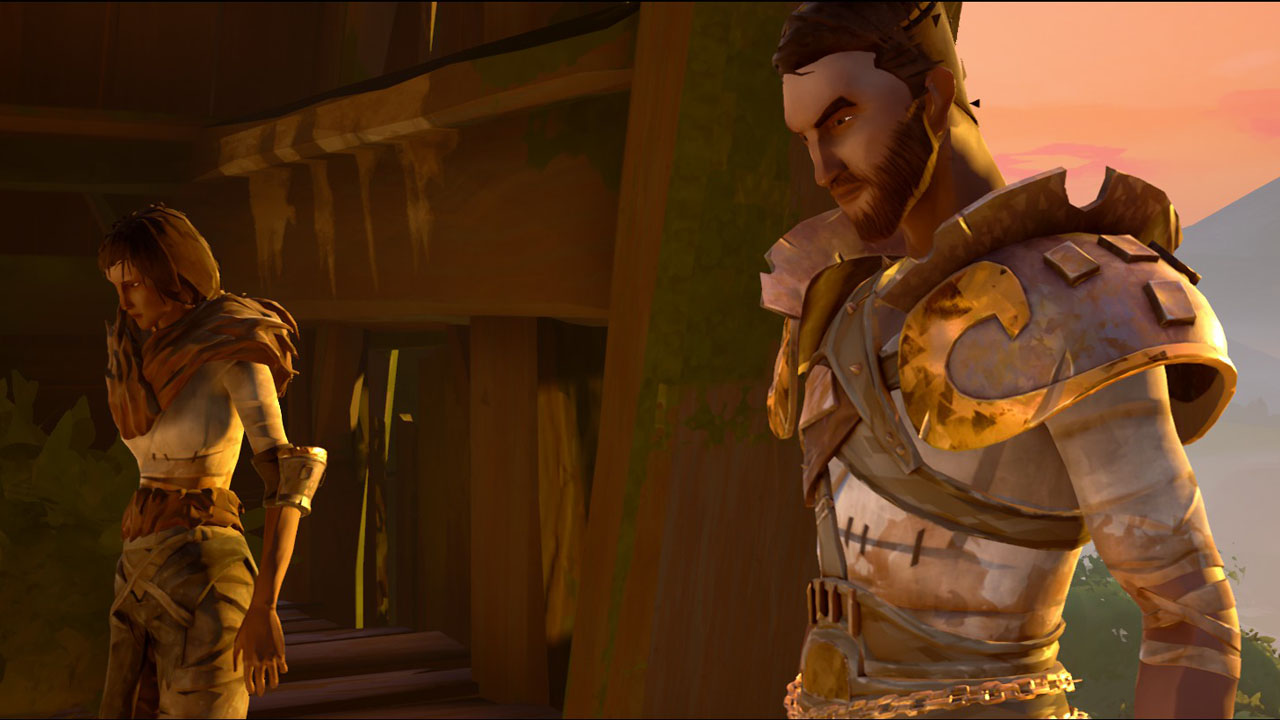 Much likes Souls, the story of Absolver is cryptic, and that’s putting it mildly. In the opening cutscene you are selected from a group of Prospects by an old man in a hooded cloak, but to what purpose? You are soon transported to a lush green area near a waterfall with no instructions and no directions given. Sounds like Souls right? You come to find out that you are in a place called Raslan and you are a Prospect seeking to become an “Absolver“. Along the way you will face many other “Lost Prospects” who seem to have either failed in their attempt, are still attempting or have gone mad.

As you explore the color-rich environment that is Raslan you will traverse through forests, coliseums, marshes and temples. Besides the great visuals you will notice that Raslan looks absolutely devastated by a cataclysmic event of some kind. Nearly every building the game is in disrepair or shambles. How exactly this happened and what it has to do with your mission are things the player must attempt to discern from the game’s brief dialogues and descriptions on equipment. A quick search about the internet through discussions will have you soon realizing that just about no one has put the pieces together. If you were hoping for a strong narrative driven experience then you’ll be sorely disappointed. However, if you were looking for the more Souls-like approach you may find it suitable. 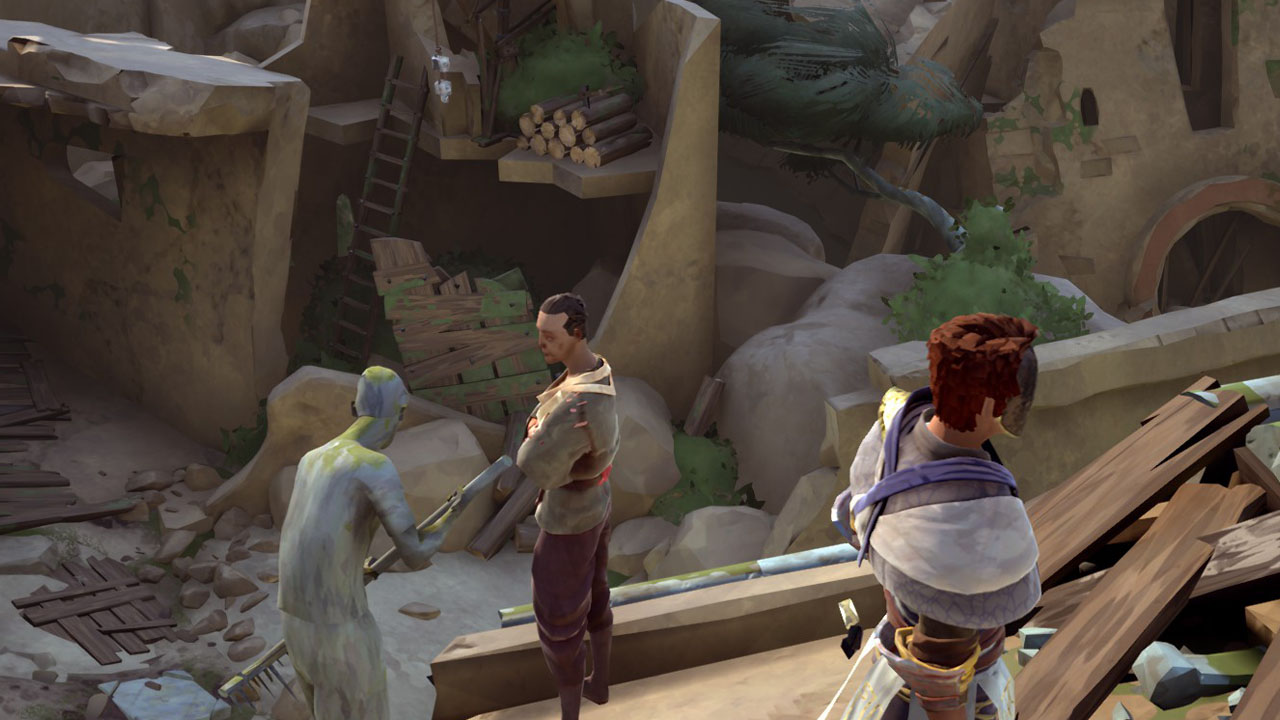 You can see the devastation in the background. What could cause such destruction?

The gameplay of Absolver, although the game’s strength, is a mixed bag. If this section was purely about the combat then it would get a 9/10, however gameplay isn’t just about that, even in a “fighting game”. As you explore the world of Raslan you can’t help but see the vision the developers had for Absolver, but you soon realize they fell extremely short of their mark. With only a dozen locations, the game takes roughly 4-6 hours to complete.

As you begin playing you can’t help but feel like “hey it’s Souls but with fighting instead of weapons”, but you soon begin to realize that it’s a very bare bones edition. All the nooks and crannies you explored in Souls that often rewarded you with sweet loot are simply not there in Absolver. And although there are multiple paths to take in the game, once you’ve selected one it’s just a straight shot to the next zone with nothing in between. With some exceptions, Raslan feels empty and uninteresting. It’s almost as if they ran out of time and didn’t have the budget or resources to put much inside the fantastic, beautiful world they’d constructed. 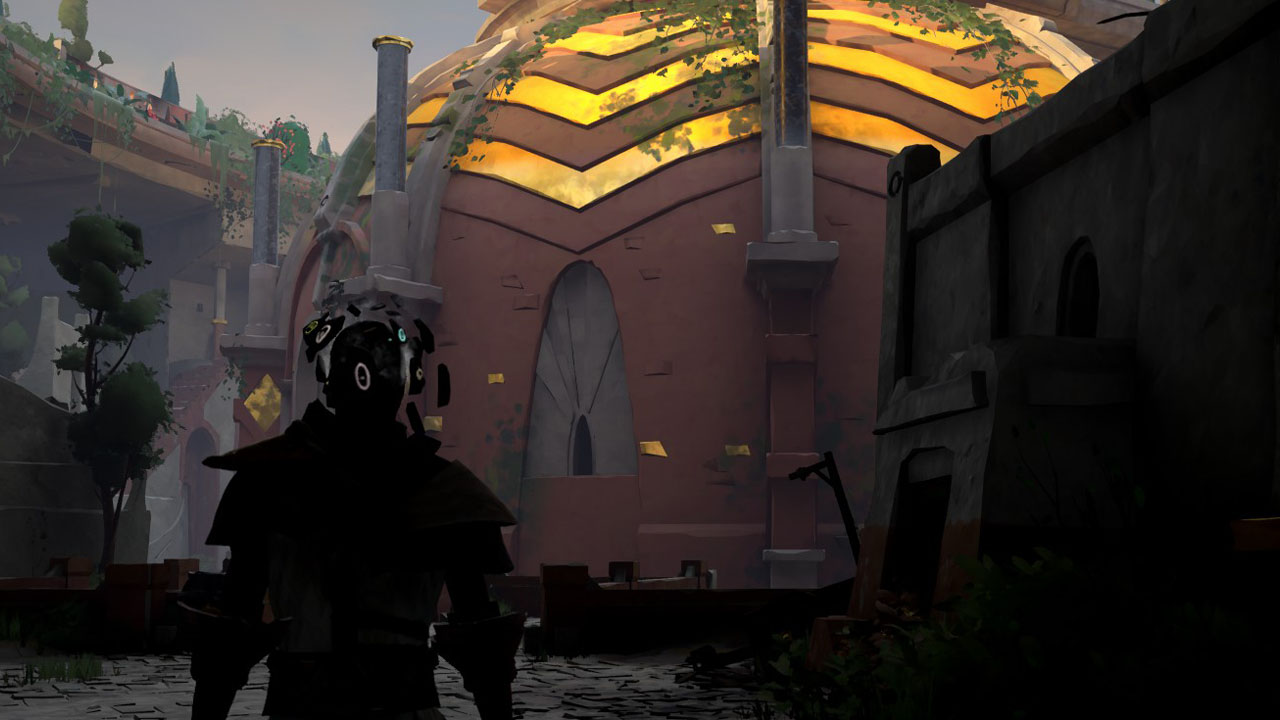 Looks fascinating and intriguing right? What if I told you this entire zone was completely empty…

On the combat side of things, Absolver shines above nearly any fighting game I’ve ever played. Martial arts have always been something that fascinate me and Sloclap manages to capture the essence of them perfectly. As you fight enemies and players you start to improve your skills in a way that is very similar to the actual experience in real life. Slowly but surely you become faster and learn to anticipate your opponents attacks, mastering your chosen combat style and becoming the Absolver you were born to be.

Via the game’s Combat Deck, players have total control of their character’s combos and moves. They can pick and choose down to the last detail exactly what they want and then learn to perfect it through practice. You can also learn tons of new moves from enemies and players alike by simply blocking or dodging them and then defeating them. This gives players a bit more incentive to keep playing as there are hundreds of moves, making for nearly infinite combinations. Each player you fight will have their on custom combos, so you will have to observe them on the fly if you wish to defeat them (much like real life). 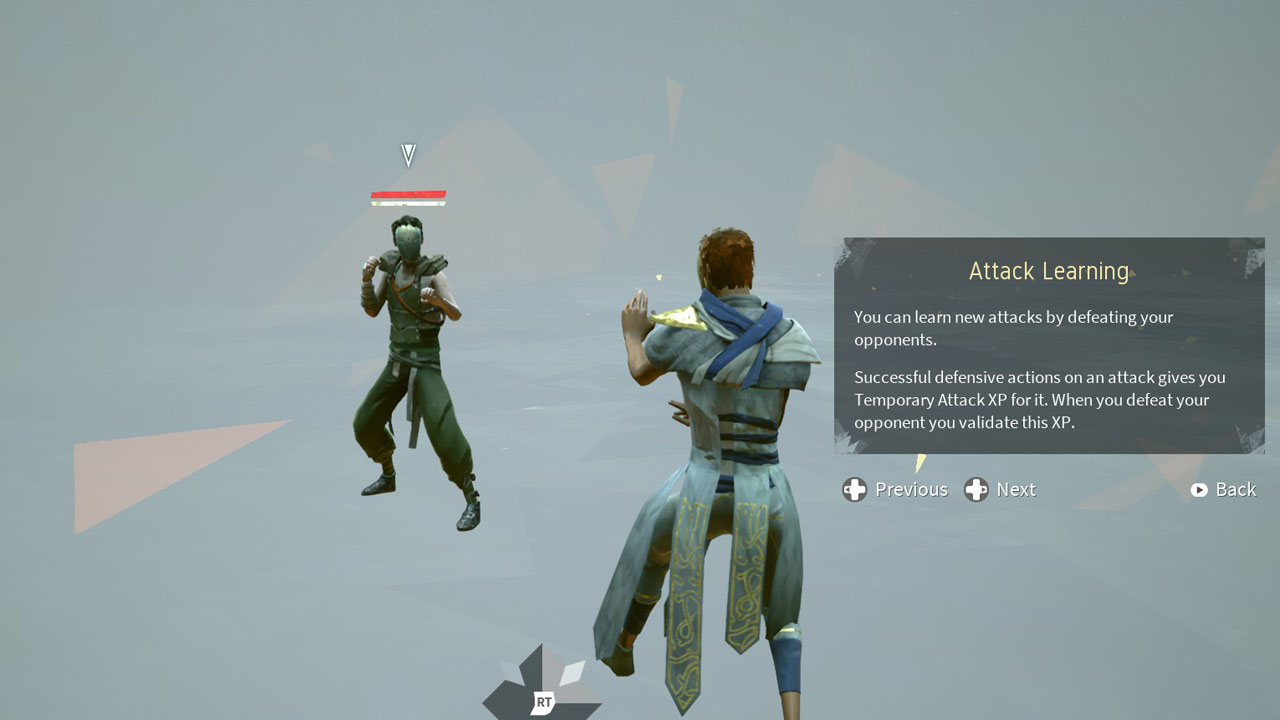 In the Combat Deck you can train to perfect your attacks and test out new combos and moves. There are also helpful tips here on how to build a good Absolver.

Much like guilds, the game features Fighting Schools, which allow players to Mentor and teach other players their “Fighting Style“. Mentors can set their combat style, and every single move they wish players to learn when joining their School. When you become the student of a School, you immediately gain access to every move the Mentor has set and their Combat Style if you have not yet learned it. Players can compete in Combat Trials to increase their School’s rank on the Leaderboards and become the best in the land. What are you waiting for Ralph Macchio? Sweep the leg!

Lastly there has been some complaints about lag and server issues with Absolver since launch. While I have experienced some, it was quite uncommon and I wouldn’t say it was any more or less than what I have experienced in most online games at release. The devs have been in communication with the community religiously, both via Reddit and their Discord, trying to get any issues resolved as quickly as possible. Kudos to them for that.

Visually Absolver is a masterpiece that pulls you in and amazes. From the very moment you enter the game you can’t help but notice the great attention to detail Sloclap has placed on making Raslan vibrant and colorful. Every single locale looks gorgeous and makes you eager to explore and see what’s around the next bend. Even the details on the enemies and players are extremely well done and they all look and feel unique which is pretty astounding considering the entire game is made up of human enemies. This game might win best visuals in a video game, at the video game awards. Seriously.

On the audio front Absolver doesn’t do anything truly mind blowing and there isn’t much in the way of voiced dialogue so you can’t really critique it. The music while not amazing does add a certain intensity to the game and makes some of the boss fights more memorable. The effects when fighting sound great and help to add to the already outstanding combat, if not subconsciously. All in all, Absolver does a sufficient job in this area because they don’t do anything that really makes you take notice, which is usually bad. Usually. 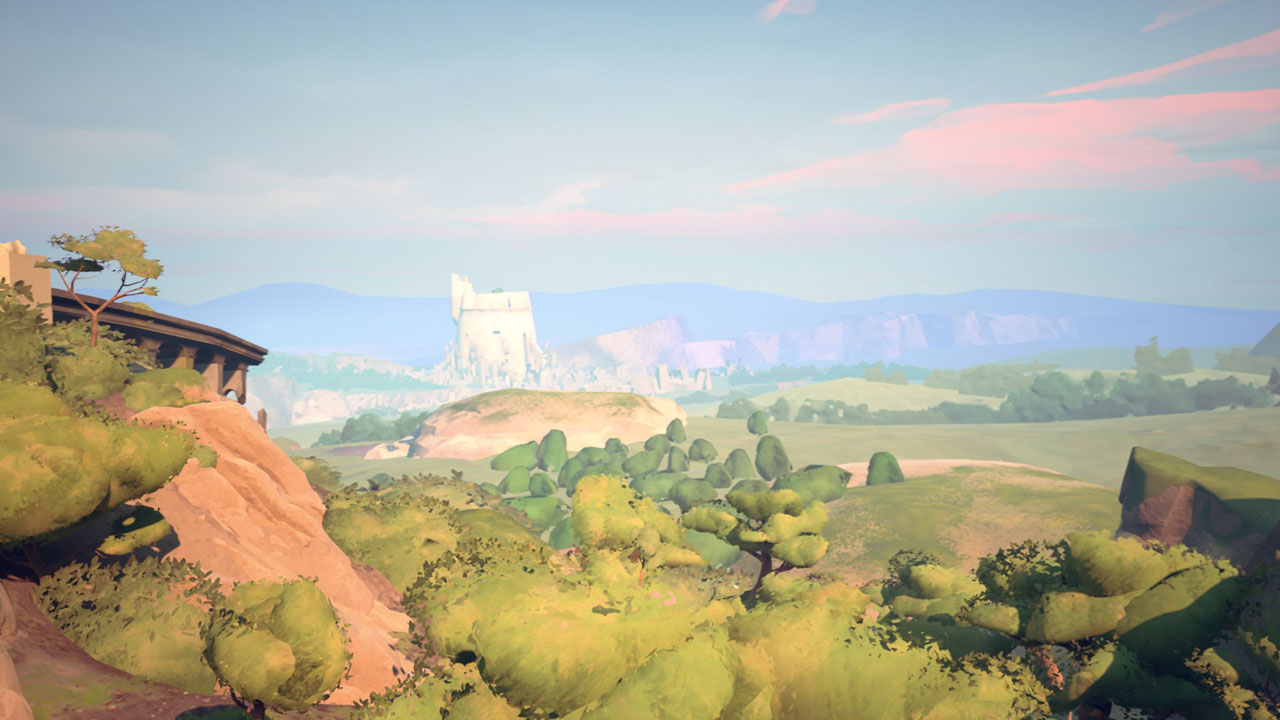 Views like this are common through out Absolver, it’s just a shame there is little to do inside them…

7.5
Summary: Absolver seems to be a conflict of two games. In one corner you have the "Souls-like" world to explore cooperatively or competitively with other players, that seems to be the original idea of the developers. And in the other you have a hardcore fighting game that doesn't need a rich open world at all in order to be successful, which seems to be what Absolver evolved into. Many players will feel short-changed that the former was sacrificed to make way for the latter, and I anticipate that this game will have an extremely niche player-base. For 29.99 USD Absolver is slightly overpriced, but if you really enjoy a good fighting game, then this one is right on the mark.
Story and Setting (7)
Gameplay (8)
Audio and Visual (8)
Pricepoint (7)