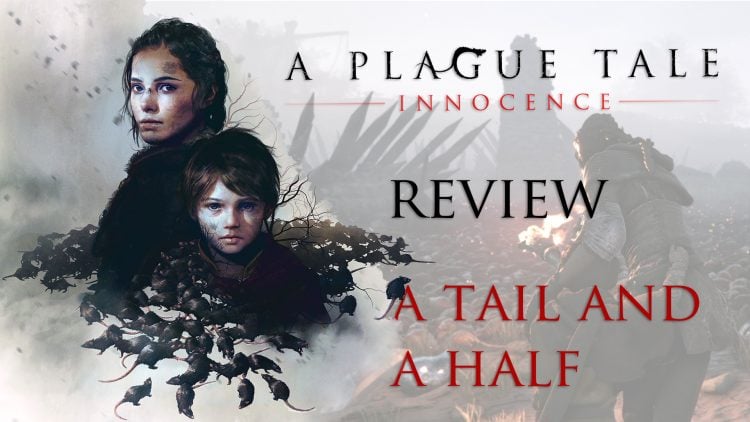 A Plague Tale Innocence combines a narrative driven story with puzzles, choices and a whole lot of rats…I’m not joking there are a ton of rats in this game. In this review I will look at how this title sets itself apart from your usual story driven titles with plenty of interesting rat mechanics, engaging plot as well as how it performs in terms of gameplay.

A Plague Tale: Innocence Review – A Tail and a Half

A Plague Tale Innocence follows a woeful tale of a family who are ripped apart during an Inquisition. The main focus is 15 year old Amicia who must now look after her ailing brother Hugo, afflicted with a mysterious disease. In order to save her brother, their journey will take them through the plagued streets that have now devastated the Kingdom of France.

They must find a path through the numerous soldiers, enemies and the masses of rats. With only a trusty sling shot to protect her brother and her resourcefulness, Amicia will face a number of evils, but will also find a few friendly faces along the way. There is a sense of mystery in this story that starts right from the beginning. Why are people after Hugo? How can his sister save him from his illness? Why are there so many damn rats?

Expect a lot of violence in this one as Amicia will find herself against a number of foes, the imagery is quite realistic and gruesome in places. If that hasn’t put you off, then you’re in for a unique adventure. 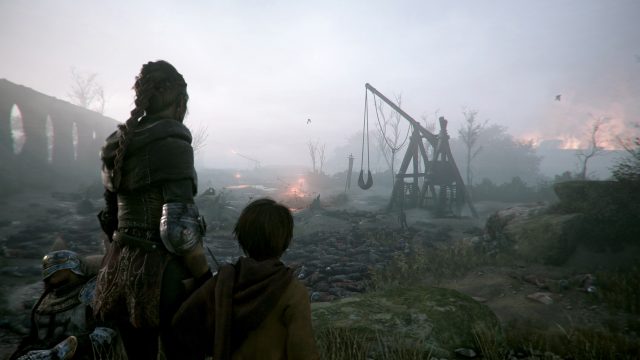 Since A Plague Tale is primarily a story driven title, you will find most of the gameplay consists of exploring areas which will be met with playing out scenarios or cut scenes, the ability to gather materials, stealth, combat and puzzles to solve. While the puzzles aren’t your traditional read a text to discover a clue, or enter a combination of numbers to unlock doors, you will find in order to progress certain areas you will need to find ways to navigate through rats. The game cleverly uses lights to help steer rats away, meaning you will need to figure out the best way out of different situations. 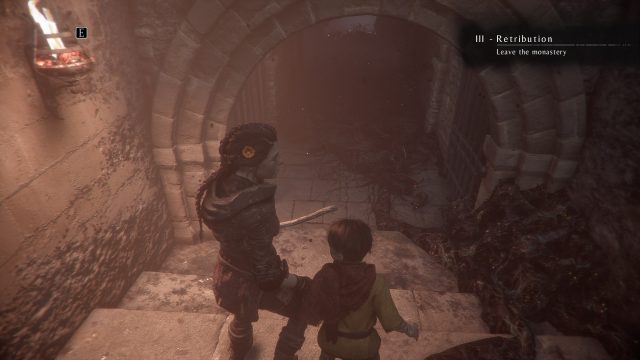 Using a sling shot you will find there is auto-aim in this title, you simply need to point in the general direction of your target to lock on and then prime your shot for strength. There is an option to turn off assisted aim, but I didn’t feel is was necessary as targets are pre-determined and you don’t need to aim at specific body parts. No need to worry about the subtleties of projectile estimations, simply lock on, determine whether the target it close or at a distance, and away you go. There are definitely David and Goliath situations in the game, which makes you wonder whether its realistic, but that soon gets pushed out of your mind by the sheer awesomeness of delivering a final blow to the giant stacked soldier which is truly satisfying. 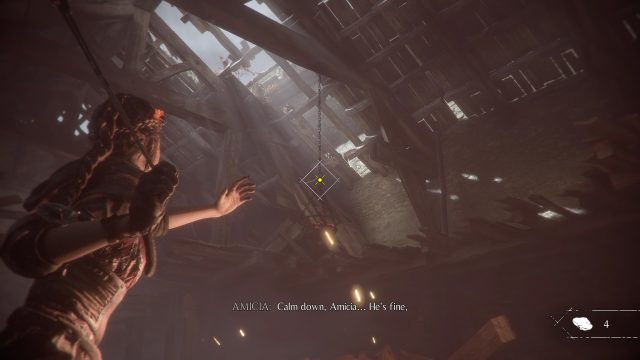 The game is told in chapters, meaning if you wish to go back to a previous chapter to pick up collectibles or simply replay a certain scene, you can do so. But be warned as any upgrades made during your playthrough from then on will be wiped clean. There are autosave points meaning you will need to wait until certain parts of the chapter or to progress to the next chapter in order to have your progress saved.

The strategy in this game concentrates on two main factors: stealth and puzzles. Letting you choose how you wish to distract the soldiers, either letting you hide while throwing a rock at a crate full of armor, or to choose a more invasive move of throwing Deverantis (a poisonous powder substance) at their helmets, causing them to remove them and then letting you swiftly hit them in the head using your sling shot. As you progress the game you will pick up new abilities that are chosen from a circular menu, most will require you to choose a target, and similar to the sling shot, prime your shot.

Stealth was a bit of hit or miss with me, at times it was well thought out and other points just seemed to be there for you to have something to do. Don’t expect Assassin’s Creed Odyssey or Sekiro stealth mechanics here, its a bit rough around the edges but it does its job and creates some sense of danger in-game. Each enemy has its own trigger meter, so you know if they have sensed your position. There is also the added factor of Amicia’s younger brother, who you can leave in certain situations to perform tasks, but leaving too much distance will cause him to panic. You will need to choose whether to distract guards by throwing a pot or going straight for a kill. With a number of enemies this can become be quite tricky to determine and can often have more than one way to be carried out. 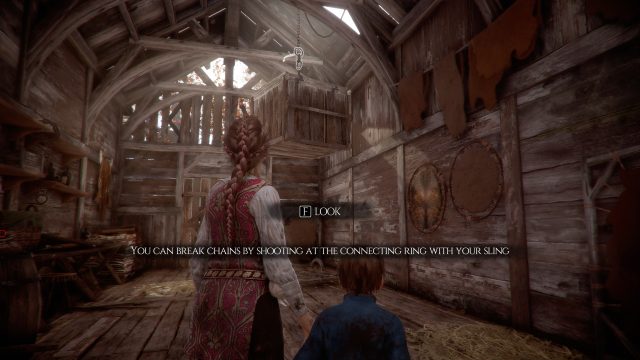 Puzzles consist of using light to help navigate your way through the vermin infested lands. You will also run into 3 or even 4 person puzzles where you will need figure out who needs to assist in turning a lever at the right time or shift different blocks around. While not overly difficult, it does make you stop and think about your next move. If you fail at successfully coaxing the rats with a light source, this can result in the most devastating death, being eaten alive by these flesh hungry vermin. From time to time you may send Hugo to help with unlocking doors or reaching places that Amicia can’t fit, while pretty straight forward it provides a bit of variation. 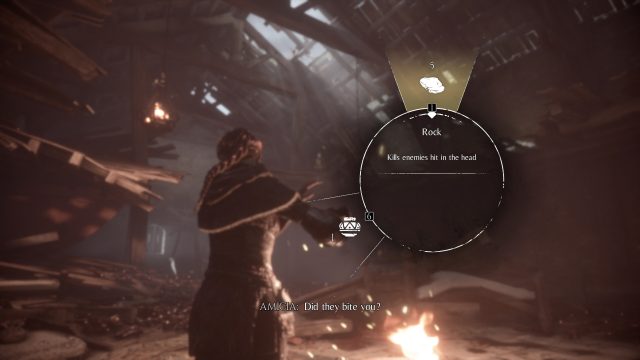 As I was playing on PC, controls for the radial menu wasn’t always easy to navigate in certain areas of game, especially if you need to switch quickly between different abilities. Re-binding keys for shortcuts was needed in my opinion, as after doing this it felt much easier to tackle more intense gameplay.

There is some degree of crafting in A Plague Tale, by gathering scraps of materials you will encounter crafting tables to help upgrade a few different aspects. You can increase the effectiveness of Amicia’s sling shot to lessen the time it takes to fire at an enemy. Other options include ways to help with stealth, abilities or to increase number of items carried. The crafting tables also acts as a save point, which is useful when you’re in between auto saves. 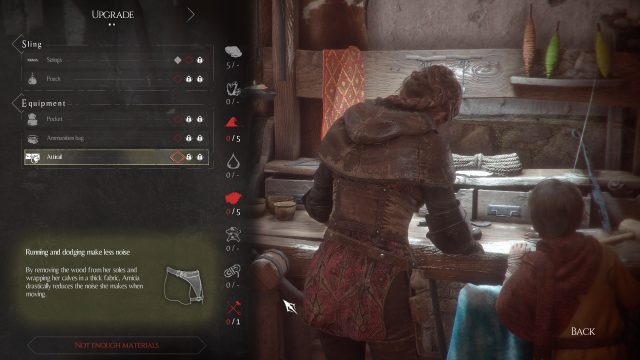 At times that I can only describe as the ickiness of the game, really out does itself. Whether its the sound of rats scurrying in a huge mass, or just the visual itself, the developer does well to make you feel a little on edge especially when you’re trying to manoeuvre around a huge vermin pile. The story is in a medieval setting, full of stone castles, close knit towns and natural forest areas. Often these places are rather creepy looking due to the rat nests that have taken over the place, which is contrasted with some really idyllic areas. 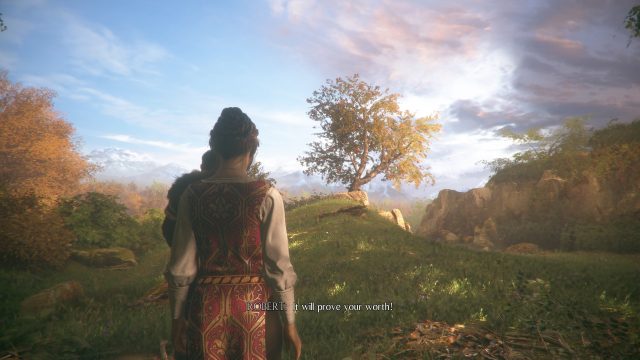 Characters had voice actors that did well to bring life to the scenes as well as created some sort of connection, making you a little worried whether they’ll survive or not. The game is developed by a French studio, so you can also switch the audio to the original French soundtrack, there is also a German option. I tried to switch the language options mid-game but it seems you need to exit to the menu and begin at a check point to have this work. As far as I could tell from the brief experience of other language options, voice acting in other languages were well chosen. 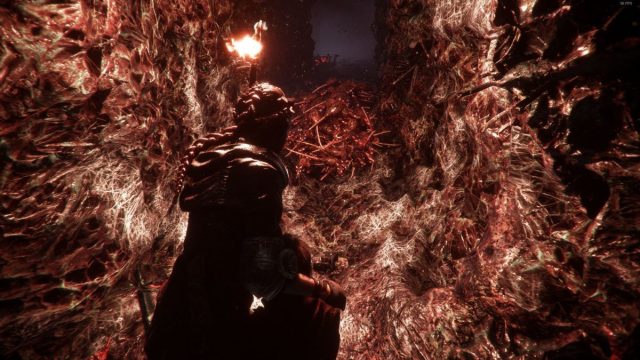 The music swells at the right moments, with daunting cello sounds that can really put you on edge. There is also the sound of rats echoing throughout the game and sticks in your memory when you’ve even shut it off. 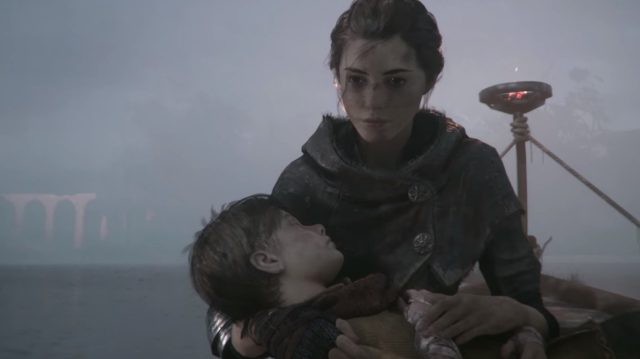 There were a few glitches here and there, some were visual where one characters head was placed at a rather awkward angle. The other caused a slight problem with solving one of the puzzles, resulting in restarting at a checkpoint to reset the puzzle. While neither of these glitches caused any major upset to gameplay, it just needed a couple of details ironed out to make the experience a little smoother.

Visually the characters are stunning, a lot of attention to detail to what they wear and the way they were designed. A slight drawback at times were the muted expressions in certain scenes. The more menacing characters really fitted their looks, and their armor was awesome.

Aboso Studio has done well to tell this particularly grim set story of a plague infested time. They truly got me to care about the characters as well as managed to throw in a few surprises along the way. A Plague Tale Innocence really manages to immerse you through the story telling, the beautiful and at times pretty disgusting surroundings. I don’t think I’ve played a game that has introduced this many rats, which definitely makes it feel quite unsettling. 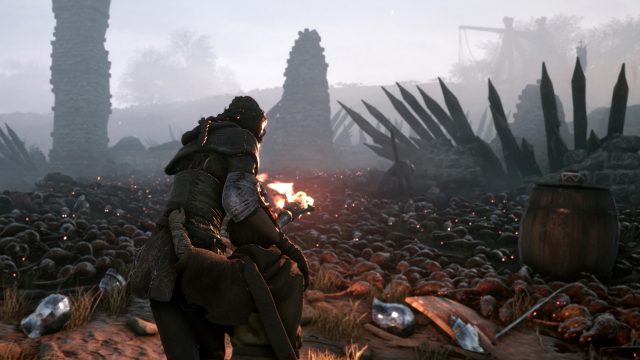 The gameplay while not always as smooth as I would have liked, did a good job of creating urgency with oncoming soldiers and the piles of rats that are ready to devour anything that crosses their path. Using the sling shot was fun as it gave quite a few ways to play the game, choosing from the different abilities such as Deverantis or Luminosa (to light objects) made it feel very unique. I think if it was strictly just a straight forward sling shot option, it wouldn’t have been as enjoyable.

While you won’t be choosing the outcome of the story, how you play is where the options lie. You can go back and play out chapters differently, whether choosing a more stealthy approach or choosing to use different abilities. Unless you wish to playthrough in another language option or use different upgrade choices, replayability is a tad limited as there is only one ending.

If you’re looking to be whisked off into a grim yet intriguing title to play, introducing mystery, puzzles and something quite supernatural, then this is a title you should pick up.

A Plague Tale Innocence is available to play on PC, PS4 and Xbox One.

If you enjoyed this review we recommend you read more our reviews in Days Gone Review: A Saphire In The Rough and Sekiro Review: Shinobis Die Many Times. If you want another narrative driven title, you should look into the lovecraftian investigative title Call Of Cthulhu Review. You can also check out what’s releasing this month in Top 5 Upcoming RPGs Of June 2019 (Bloodstained, Warhammer And More!).

7.6
Summary: A Plague Tale Innocence does well to explore a plague ridden story and include entertaining game mechanics which makes it unique. Some improvements to certain visuals and mechanics could have made the experience a little smoother, but overall the environments are detailed. The story really shines through such a grim setting along with some memorable ratnado moments. A playthrough could take you 10 hours or more depending on your gameplay strategies and whether you choose to discover all collectibles.
Story & Setting (9)
Gameplay (8)
Audio & Visuals (8)
Price Point (7)
Replayability (6)