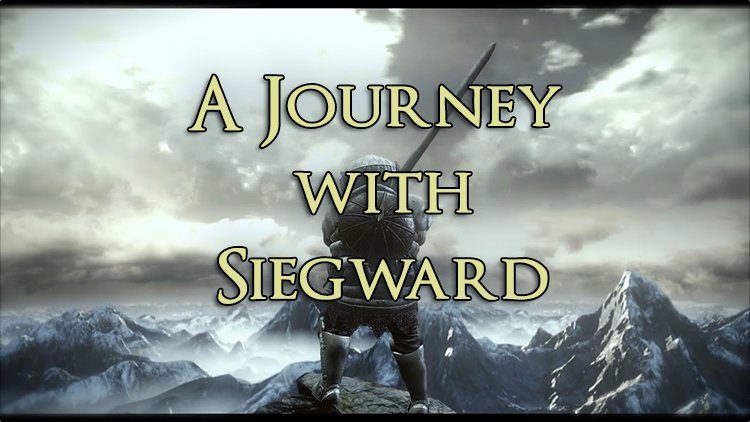 Our first encounter with Siegward, in Dark Souls 3, is more than a little awkward. Our initial reaction is to confuse him with Siegmeyer from the original Dark Souls. His armor, his voice, and the manner in which he speaks seems to be pulled directly from Dark Souls. More than a few players, I am sure, said something akin to, “Why the hell is Siegmeyer in this game?”

Dark Souls 3 has, subsequently, been criticized for its ‘fan service’. An argument not without merits. Although, the assessment is hard to completely refute, in the case of Siegward, most players, once they’ve fought the Fire Demon, were so heart warmed by the experience, did it really matter anymore?

We can address some criticisms of Siegward’s familiarity by looking at where the two ‘Onion’ knights hail from. Catarina is a land known for its honorable and faithful inhabitants. They are a bright cheerful lot who like their festivities and spirits. One of its more unique attributes is a finely crafted, if not a bit peculiar, onion shaped armor. Beyond its odd dimensions, which its knights notoriously find embarrassing, it’s hard to criticize the determinate craftsmanship. The large curves work wonderfully well in combat as most fine blades will want for purchase against its bulbous form. 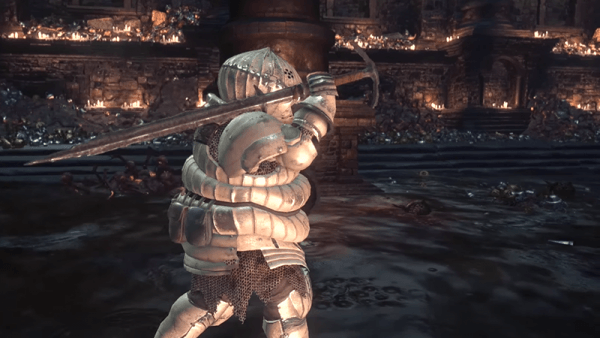 We should also surmise, Siegmeyer wasn’t the only knight to wear this armor. In fact, it is reasonable to guess the Knights of Catarina, an elite military squad, all wore the same armor as a sigil of the land. One would think this also affords an inherent defensive strategy on the battlefield, since it would be difficult to distinguish one knight from another. Given these factors, we shouldn’t be too surprised to find Siegward wearing the same armor as Siegmeyer, and looking very familiar to us.

I recently went back and listened to Siegmeyer’s dialogue from Dark Souls 1. Much to my surprise, the manner in which he speaks, and his vocabulary, are distinctively different from Siegward; aside, of course, from the tell-tale hmm’s & oh’s. These easily could be ascribed to familial or cultural idioms. Actually, it would be quite interesting if there were a familial relationship. This would also bring needed detail to the curse of the undead, and how it’s contracted and/or passed on.

As most people are familiar with, the Sieg- prefix means ‘Victory’. It is not hard to imagine many of the Knights of Catarina having this prefix in their name, given the obvious connotations. Of the three Catarinians we have met, Siegmeyer, Sieglinde, and Siegward, they all have the same prefix. If Sieg- is the common denominator for most of the knights, the suffix would then be a unique signature. In the case of Siegward, the suffix -ward, both in Old English & Proto-Germanic, refers to a protector and/or guardian. It’s interesting to note, the native English meaning denotes a spatial or temporal direction, as in backward, seaward, toward, etc, al. We know the lands around Lothric do not behave normally in spatial relations to previous games. The narrator of the introduction to Dark Souls 3 out and out says they are in movement. Given the temporal shenanigans of the lands of the Lords of Cinder, Sieg’s journey takes on an epic quality and becomes, literally, an odyssey through space-time. No wonder we see him dozing at every opportunity. Both meanings of the suffix for Siegward play nicely with the concept, and purpose, for our heartwarming and duty-driven knight. However, at the core of Sieg’s journey is his role as protector to his friend Yhorm’s dignity, legacy and transcendent purpose. 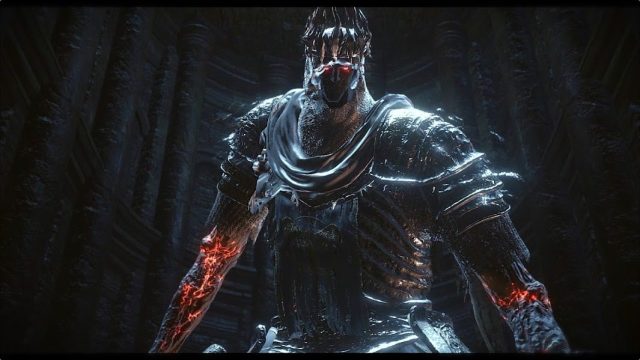 You see, Yhorm took a chance while ruler of the Profaned Capital. At some point, he understood, if the Profane Flame was left alone its proximity would reduce the citizens to madness. It’s effects might had already seeded paranoia amongst the general public. The solution: become a Lord of Cinder & link the fire to regenerate the universe. The ultimate ‘fight fire with fire’ resolution. It is quite possible Yhorm came to the conclusion that there would be no destroying the Profane Flame. Instead, perhaps, he could link the fire and become a Lord of Cinder, and his ashes could contribute to a new beginning. With the fire usurped and the First Flame extinguished, this, at long last, would lead to the nullification of the insidious Flame.

Once, Yhorm was thought of as a ‘one-man vanguard’; a shield for his fellow troops, and protector of the realm. Then, in an event which is not fully explained, he lost someone very close to him. Yhorm became aggressive, angry and isolated. When he put away his shield in favor of a two-handed machete and tried to convince his subjects of the wisdom in linking the First Flame, his legacy was cemented. This radical change in personality must have made everyone nervous. The people of the Profaned Capital, regardless of asking him to rule, grew to distrust his leadership. Through their enmity, Yhorm became a puppet ruler. As the people of the capital were both rich and powerful, they began to feel his protection was no longer needed, and considering he was counseling a risky maneuver, along with his drastic personality change, his judgement became extremely suspect. Also, remember, an ancestor of Yhorm originally conquered these lands, and subjugated its people. The result being  no love lost between Yhorm and his subjects. Yhorm did make overtures in good faith, cautioning them against cowardice by offering them a legendary giant slaying sword Stormruler. However, the damage was done, and the people were not moved. 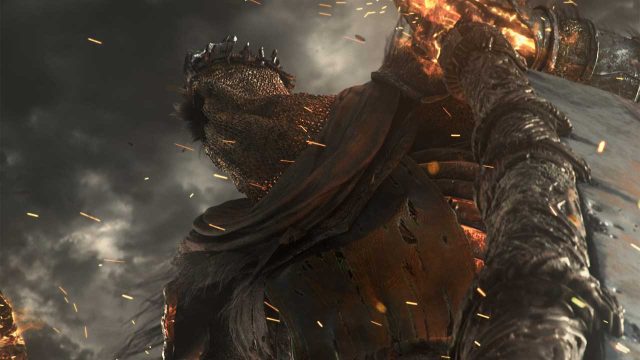 It’s hard to know for sure if Yhorm knew the repercussions of linking the fire in such close proximity to the Profane Flame, regardless of intentions. Considering his state of mind, I doubt he cared much, but the results were deadly for the residents of the capital. We saw evidence in Dark souls 1 of melted stone after Gwyn originally set himself ablaze to save the light. In Yhorm’s case the only thing to burn was human flesh. The effect of the Profane Flame, on the First flame, seemed to have a localized backlash on the capital. Its citizens were burned to cinder while the Profaned Capital, and its riches, were left relatively intact. 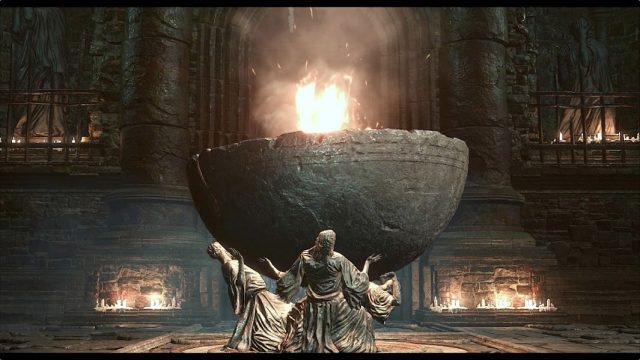 Obviously, the Profane Flame was not extinguished by this calamitous event, most likely due to its abyssal constitution. The nature of the Profane Flame defied the laws of the Age of Fire, where there are no constants, and entropy is fundamental to the universe: everything fades, erodes, decays and dies. The existence of a flame that never fades, by its very nature is profane. As such, it is a corruption of the Age, an abyssal entity, and through its proximity warped the fabric of reality, bringing madness and perversion to all sentient creatures.

Wether it was turning Hollow, like Gwyn, from linking the fire, or through Yhorm’s proximity to the corrupting effects of the Profane Flame, or even the guilt from the disastrous consequences of linking the First Flame, Yhorm was left alone in the capital, with piles of burnt corpses, and thus slowly went mad. However, Yhorm did make an allowance for the possibility of his continued descent into madness. He gave a dear old friend another Stormruler.

There isn’t much information on Siegward and Yhorm’s relationship, actually it’s infuriatingly obtuse. We get one measly line that doesn’t even connect the two directly. The inference is fairly clear, though. Yhorm gave Stormruler to an old friend with the condition a promise was to be held. Siegward bears the giant slaying sword into Yhorms boss room. So, at one time or another, maybe at the Profaned Capital’s original location or maybe in Catarina, the two had a relationship of deep admiration. You don’t ask just anybody to end your existence, if it comes to that. As to the nature of their meeting, and their friendship we will never know. Yhorm obviously thought highly of Siegward, highly enough to place a great burden on Sieg’s heart. The promise was grave indeed, Yhorm doubted he would ever follow through as a Lord of Cinder, most likely due to his darkening spirit and mental instability, and asked of Siegward to take his life. In this manner he could fulfill his obligation, and his ashes might be borne to that ancient kiln, Firelink Shrine. 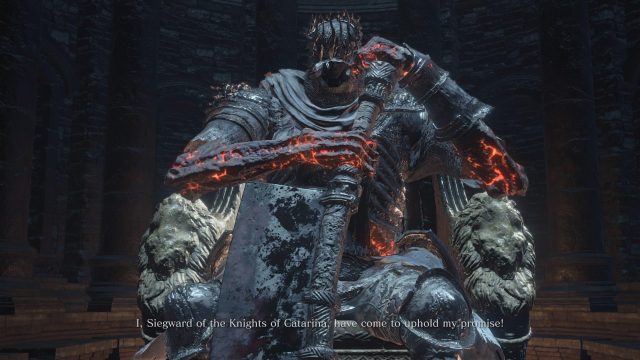 It is hard to believe, given Siegward’s relationship with Yhorm, he actually wanted to fulfill this duty and keep his sacred promise. No one would want to have to fight a close friend, let alone kill them, however it wasn’t a choice. Throughout his journey, Sieg takes every opportunity to rest, sleep, get caught in silly situations (he is a master planner, after all, ha), and sit by a warm fire. God knows how long he has been on this odyssey. With the First Flame in its death throws, temporal space had become wonky, elusive, and unpredictable. The fact that Siegward actually made it as far as he did says a lot for his intelligence. Yet, every encounter we have with Siegward he is in a ‘pickle’. It’s easy for me to imagine Siegward purposely dragging his feet, in hopes he will come up with another solution, other then killing his friend. Unfortunately, Siegward had to keep his promise and ultimately he fulfilled his duty. 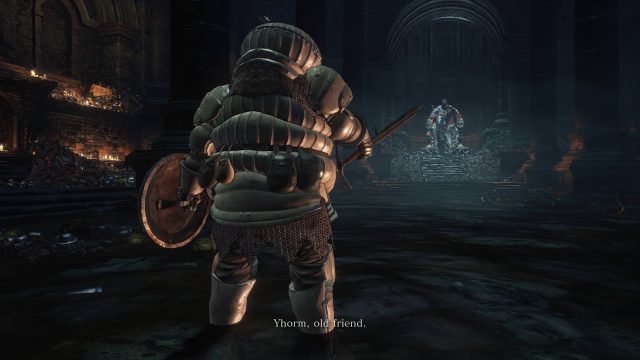 The Heart of Dark Souls

As heartbreaking as Siegmeyer’s story is, Siegward has a more fundamental purpose in the context of his game. Siegward’s narrative works like a spinal system in the Dark Souls 3 anatomy. It acts as both structural foundation and nervous system. Without Siegward, the game just doesn’t emote; it loses its center and it loses its heart. His idiosyncrasies, regardless of their familiarity, bring an emotional relevance to the experience of traveling through Lothric’s blighted landscape. We connect with him on a very human level. We can relate to his doubt and confusion, his sense of responsibility and the dread of having to live up to his irrevocable duty. We get to laugh, eat, sleep, fight and drink with Siegward. He is our friend. He is our hero. 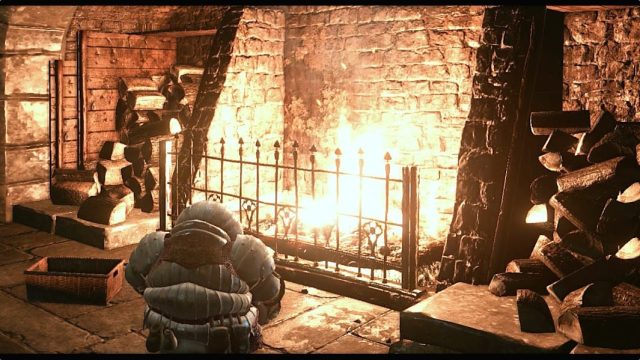 If Dark Souls as a series does nothing else, it teaches us the importance of every action and reaction, being aware of our environment, and learning from the mistakes we make through repetition and awareness. In a Dark Souls game, the journey is everything, and similar to both of our beloved Onion Knights, the journey represents a need for perseverance, conviction, and heart. Maybe this is why Siegward’s ultimate fate is left unclear. Sometimes we succeed and sometimes we fail, regardless it’s the journey which offers us our true insight.

Included is a movie I made on Siegward’s story line. It is actually the first time I have attempted to make a video for an NPC in a Souls game. As such, I kept it fairly linear in its telling, but I did try to include scenes not in the game to give the encounters context. My focus was to capture the ambiance, the mood of the game, while showing Siegward’s heart, humor and conviction. If you have time to watch, I would be honored. And one notable citation about the article: the Lore Hunter helped with editorial duties. Without our conversations my knowledge on the lore of DS3 would be severly lacking.

What do you think about the journey of Siegward through Lothric? See something here you agree with or have something to add? Share your thoughts in the comments.

I make lore-ish videos on YouTube for Bloodborne and Dark Souls. Dabble as a word cobbler. Other than that, just an old man hiding from an interesting life. YouTube: https://t.co/7LlFlUIJLH

3 comments on “Dark Souls 3: A Journey with Siegward”