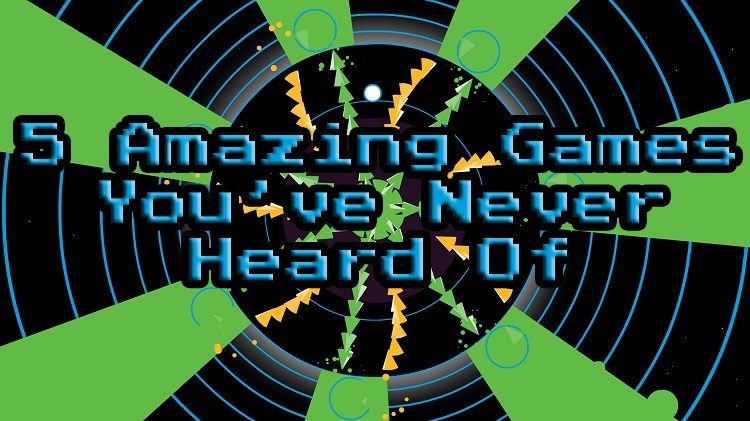 Some games are overhyped, while other games are ironically popular because of how bad they are, but the biggest issue in the indie-gaming world are games that should’ve been popular, but simply don’t have any recognition. And that’s why I’m here today.

These are some great games that sadly never managed to sell well, and was also a result of nobody really looking at it. Let’s start the list from good to best.

Flywrench might be a name you’ve heard before in the popular game Super Meat Boy. Some people even thought that Flywrench was a made up character just for that game. In reality, Flywrench was a ~2007 flashgame made by Messhof (The people that brought you Nidhogg) that recently released as a full version in 2015 with features such as online levels, a level editor, and simply much more content. You play as Flywrench, a thing that can fly indefinitely by flapping its wings. The gameplay is about you trying to fly to the end of the level without touching a wall or touching a ‘barrier’ with an incorrect color. There are 3 colors that change based on what you’re doing. When doing nothing, you’re white, and can pass through white barriers. When you flap your wings, you’re red for about half a second, and can pass through red barriers. When you’re spinning, you’re green, and can pass through green barriers. This provides for unique gameplay that demands you to think fast and mix up your gameplay style by purposely pushing you to never fly comfortably in this brutally difficult… Platformer? Kind of. If you’re looking for a game that’s all about great controls and great design, look no further.

Similar to Flywrench, Super House of Dead Ninjas was also a flash game that got fleshed out with more features for a premium version. While it would seem like this is a simple retro styled platformer, it’s actually a really fast paced, and also a really difficult game. You play as a ninja with a large arsenal of unlockable weapons that can completely change your gameplay style as you fight your way from the top of the tower down hundreds of floors to reach the end boss. The game demands speed as you’ll get damaged if you don’t pick up a time increase in about 30 seconds. You’re also encouraged to use any strategy, throwable weapons, or bombs to kill as many enemies as fast as possible. The point of the game is its die-repeat type gameplay, which is further improved by the developers making the entire tower randomly generated. The game also features a simple level editor, and online levels for those who find the main game too chaotic or too easy. This one was an absolute blast to play because it brings out the best mechanics from very old platformers and mixes it in with new mechanics such as random generation to make it such an awesome and replayable experience. If you’re still not convinced, try the online (and honestly much worse) version here.

Soundodger+ is by far at least 2nd on my list of top rhythm games. And yet again, the game has an online free ‘demo’ if you aren’t ready to buy it. The game is incredibly simple, easy to pick up, and hard to put down. You play a ball. Your job is to dodge all the notes. That’s it. The game is incredibly fun, and its simplistic nature is both welcoming to new players with many easy levels that require little movement and thinking, and appealing to more hardcore players that would rather always get a bad score and repeat the same song about 20 times. The notes perfectly match the song to create an overwhelming scene riddled with bullet hell that still manages to create a beautiful sight. The game also comes with a level editor and auto-generation (Tip from me, don’t use the autogenerator. It barely works well, if at all). While the game is beautiful, accessible, and downright fun, I wouldn’t recommend it if you don’t like bullet hells. But no need to drop your money because you ‘think’ you will (or won’t) like it, just try the online demo here.

Now I know what you’re thinking, a Mario kart clone? Surely, surely you must be joking! Fortunately, I am not. This game is… Surprisingly the best karting game I’ve ever played. Now I’d be lying if I said the game didn’t sell well, because it has. But let’s face it, most of you still probably never knew about this game. The gameplay is basically a kart game with a couple of twists, mainly the fact that there are ‘transformation gates’ that transform your car into either a ship or a plane, and back to a car again. The ship and plane variations completely change the control scheme and how the controls feel, which leads to some nice and unique gameplay. The game also features iconic characters like the TF2 crew, the driver of crazy taxi, and so on. The game is surprisingly very well designed, with each map feeling like an adventure (and I don’t take that term lightly!). Each character has different stats such as handling and speed, which actually makes choosing a character worthwhile. The gameplay is surprisingly fun (I say that a lot because… well… new sonic games are kind of awful). For the $20 pricepoint, I actually had a blast with the singleplayer campaign. And yet again, the design of the maps are AMAZING. I love everything about it.  With the unique maps, great design, and a few twists on gameplay, Sonic’s racing game is the best yet. At least in my perspective. Here’s a gameplay video of a guy who apparently doesn’t know veteran techniques like drift boosts and air tricks.

So we’ve been talking about great, fun, and unique games. However, none of them comes even close to this work in progress masterpiece. CrossCode is a game I’ve been watching ever since it made its way to indiegogo. The game may literally be my favorite indie game of all time. The art is gorgeous, the characters are well made, the music is fantastic, and the combat is everything I’ve ever wanted from a topdown RPG.  It’s hard to explain what CrossCode is, because there’s way too much to it. All I can do is give you a rough understanding of how fun it is. The game, even in its incomplete state, is without a doubt worth every penny I’ve dropped into it. The game is just made with so much love and detail that I felt kind of insulted when I heard it isn’t doing well in sales. It’s everything you want in an RPG. Great combat, a huge skill tree (with a respect option if you ever feel like you dropped the wrong points), enemies that drop materials and money that can be traded with merchants for weapons and armor, and both ranged and melee combat, and many exploreable areas with hidden treasure, a big map, sidequests, skill attacks, and just so much more. I think it’s easy to get overwhelmed in everything the game offers and shows on screen, but its topdown nature makes it easy to keep track of everything going on. It’s a fantastic, polished experience, and is an absolute MUST play. The early access content lasts about 7-8 hours, and is definitely worthy of your attention. There’s a short online or downloadable demo that you can play here. And if the online demo doesn’t work and you’re too lazy to change browsers, try the downloadable version on its steam page. You won’t regret it.

Get your thoughts published!