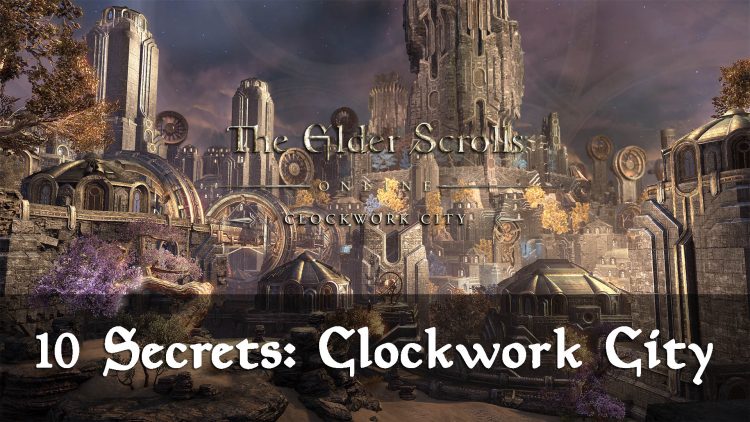 Explore Elder Scrolls Online newest Zone, The Clockwork City, and check out the 10 secrets you likely missed while in the Clockwork City, the Mechanical Realm of Sotha Sil. This is aimed for those who have completed the content and may have missed stuff, so spoilers ahead!

10 Things to do in Clockwork City | ESO

? Unlock all the dailies: From Delves to Quests

If you are looking to obtain the awesome new motifs (Apostle Style and Ebonshadow Style), you’ll have to explore and do side quests. There’s a total of 4 “Factions” that grant you quests, but only after you’ve completed entry-level steps. They are:

As you walk towards the Restricted Brassworks, you’ll go by a Factotum that is driving its Merchant owner crazy with its wrong replies and reactions. Besides being pretty hilarious, it’s one of the first hints of Daedric influence within the Brass Fortress! Things get so bad that Assistant Zanon comes to try help too 😉 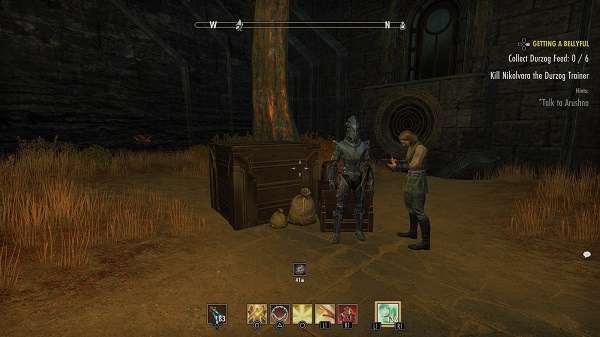 Find The Shadow Cleft, a delve that is actually not within the Clockwork City but rather taking you to Nocturnal’s realm of Evergloam. There are actually two locations where this happens, once here and once for the World Boss Exarch’s Egress. 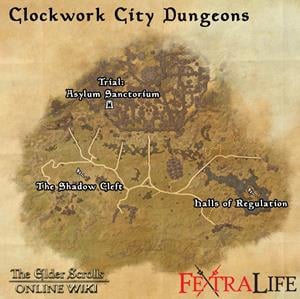 7️⃣ Build Yourself a Dummy

A special quest called “The Precursor” initiates a hidden treasure hunt across all of Tamriel, that results on the Achievement and Trophy “Precursor Maker“. You must find Associate Zanon or pick it up from a notice board by the Basilica. Follow the steps and you’ll eventually have to visit a variety of dwemer ruins across Tamriel to gather all of the parts. It turns out the Apostles are not impressed by the construct, so Zanon gifts it to you instead. Bonus: You can get one of these per character you have! 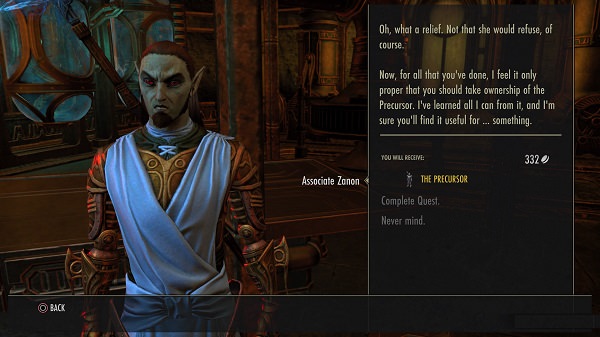 When you visit the Mnemonic Planisphere, a lorebook called “The Memories of Sotha Sil” explains the reasoning behind the construction. You can then walk around and listen to what the stars say. Sometimes, you’ll hear Sotha Sil himself, whilst other times you can hear:

If you are wondering why Sotha Sil decided on this, here’s a hint: 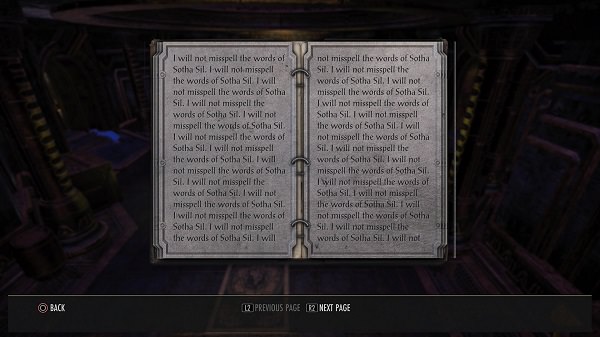 5️⃣ Get Yourself a Skeleton Key

This particular daedric artifact has seen its share of action in the Elder Scrolls World. In fact, it’s not a creation for this specific storyline, but a recurring object from Morrowind, Oblivion and even Skyrim. Thus, Sotha Sil charging Divayth Fyr with safekeeping of the key is “History” in Elder Scrolls. You can acquire a housing item called “Skeleton Key Replica” that looks exactly like the real thing. Obtain it from the Brass Fortress by talking to the Achievement Furnisher after you have completed “The Burden of Knowledge“. It costs 7,500 gold.

The Feather Court is also a returning theme, this time from a Group Delve that you may or may not have completed in Stonefalls. The Crows address you as such if they “know you”, as you must have befriended their cousin tribe at Crow’s Wood to complete its quest. 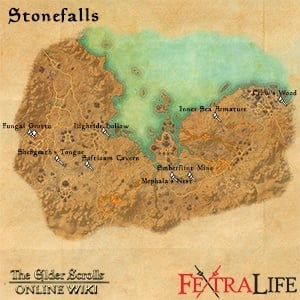 3️⃣ Pests in the Clockwork City

Whilst doing the main quest “Lost in the Gloam“, you’ll talk to Constable Drados. If you follow the conversation options beyond what is required for the quest, you’ll find one of the most amusing exchanges in the DLC:

YOU: Have you ever seen something like this before?

Constable Drados: “What? Like the birds? No.We did have a skeevaton infestation once. Someone left the fabricator running and it spewed out thousands and thousands of the things. The apostles deployed clockwork cats to catch them, but then we had too many cats…”

YOU: So someone sent out clockwork hounds?

Constable Drados: “Exactly. By the time Sotha Sil caught wind of it, the Fortress was packed full of wind-up bears and motorized tigers. Quite a scene.The Clockwork God destroyed all of them… except the skeevatons. I like to think he has a sense of humor.”

After finishing the Main Quest, you’ll be asked to meet Sotha Sil at a shrine that he has built. Talk to him extensively at this location, and you’ll find insight into what he knows of what is to come. He explains he does not admit Godhood, and believes Vivec to be a benevolent liar as he is simply enjoying the ride. But he warns that Almalexia has dangerously fooled herself into belief of her own fantasies. This specific exchange is significant if you know that, later in the story of Elder Scrolls, Almalexia goes mad and murders Sotha Sil within the Clockwork City itself.

YOU: Who are you really? / I stand ready. Can you at least tell me who you are before you go? Who you are really?

Sotha Sil: “You expect something grand, but I promised you the truth.

“I am only what time and circumstances made me. Son of a lost house. Friend to a fallen king. Some will tell you that we are the product of our choices. I’ve never found that to be the case.”

YOU: But you’re supposed to be a god, right?

Sotha Sil: “I am whatever the people need me to be. A guardian. An oppressor. For some, too distant. For others, too meplesome. I am the canvas upon which they paint their dreams and resentments. A vessel for their hopes and doubts.

A mirror. Nothing more.”

YOU: If you believe that, why even call yourself a god?

But my companions, Vivec and Almalexia see their divinity as essential. Godhood brings them joy and purpose. They find meaning in the theatrical. Who am I to deprive them of that?”

YOU: What are your feelings on Almalexia? / What about Almalexia?

Sotha Sil: “Almalexia defies simple analysis. I doubt she could even describe herself accurately.

To understand Almalexia, you must first understand the value of fiction. Vivec fancies himself the poet, but in truth, Ayem is the greater storyteller.”

Sotha Sil: “Vivec knows the boundaries that separate fact from fiction. He knows them so well that’s he’s learned how to break them. He exists inside his verse, but recognizes the lies. The contradictions.

He both does, and does not believe his own tales.”

YOU: How is Almalexia different?

Sotha Sil: “She believes her tales implicitly. As does everyone else. Her capacity for deception appears limitless. She sows lies like a master gardener sows seeds, and the harvest of trust and adulation is breathtaking in scope.”

YOU: Does that bother you?

Sotha Sil: “Not in the slightest.

As I said, we are, all of us, bound by our nature. Almalexia does what she does because she cannot do otherwise. It will not end well. But then, even the best endings rarely bring joy.”

YOU: What do you think of Vivec? / And what about Vivec?

Sotha Sil: “Vivec is my brother. He knows my struggles and I know his. That knowledge makes our relationship… complicated. To truly know someone is as much a curse as it is a blessing.”

YOU: What are his struggles?

Sotha Sil: “Regret. We are bound by that at least.

He also suffers a kind of enslavement. Not unlike my own, in fact. Beauty holds the keys to his shackles. Beauty, and a love of great works. Great heights. His appetites are insatiable, thus his despair.”

Vivec craves radical freedom – the death of all limits and restrictions. He wishes to be all things at all times. Every race, every gender, every hero, both divine and finite… but in the end, he can only be Vivec.”

YOU: And that’s not enough? To be a god hero?

Sotha Sil: “Not even remotely.”

1️⃣ Prophecy of your Death

If you have completed all the quests, including the side quest Cogs of Fate, travel to the “The Grand Prognosticator” and provide him with the passphrase that you have learned from your travels and quests. He will deliver clues of what’s to come next for you, and it sounds pretty gloomy but hints we are going to the Summerset Isles next! You will earn the Fortune and Fate achievement / trophy.

Prognosticator: “By the word of Seht, I am bound.

No pronouncements can be furnished without without proper statistics to analyze. Please provide the appropriate passphrase or present yourself to a Clockwork Apostle for immediate data collection.”

I see an island. A tower. Three princes. Darkness spreading across the land. I see a golden knight and an unexpected sacrifice. I see… an end…”

YOU: That doesn’t sound good.

Prognosticator: “Everything must perish. That is the way of all reality. But the end that I see… you can alter the outcome. The variables indicate a minuscule percentage point in your favor.”

YOU: So there is a way to change the future.

Prognosticator: “A chance… Lord Seht and the Three willing. 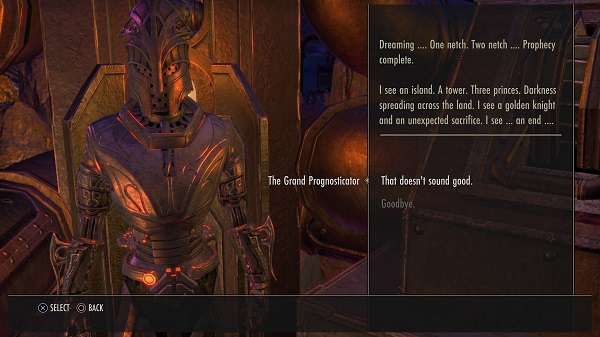 If you love secrets, read our Grahtwood Secrets article, our ESO Sets Guides or find out why, after 3 years, I’m still addicted to Elder Scrolls Online.

8 comments on “10 Things you Missed in Clockwork City | ESO”